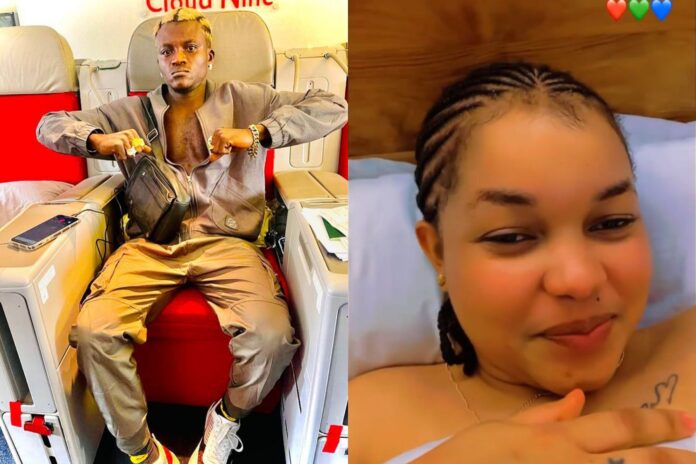 Sensational Nigerian artiste, Portable has been accused of snatching someone’s girlfriend, hours after arriving in Kenya for a gig.

Portable who is currently in Kenya shared a video of a beautiful Kenyan lady as he spends some good time with her in his bed at the hotel room.

Hours after the ‘Zazu’ hitmaker shared the video that went viral, a man took to social media to repost the video lamenting that her girlfriend has been taken away from her by Portable.

The boyfriend shared a video of the lady and himself and wrote, “see portable collect my gee babe ni. Ooo. E don cause wahala for Nairobi.”

In other news, a man has dragged veteran Nollywood actor, Kanayo O. Kanayo on social media after he opened up on the real sacrifice he performs to make his money.

In a new video privy to Ghgossip.com, Kanayo O. Kanayo came clean with the source of his wealth and he reveals that the secret to his success is hard work and sacrifice.

According to Kanayo O Kanayo, whilst others are deep asleep dreaming at 1am, he is awake working and this he said is the sacrifice he does.

The actor is seen in a video deliberating in with production crew on location as he was on a set for a movie shoot at an undisclosed place.

Reacting to his claim, an Instagram user identified as @davididavos wrote: “Baba after 1am, what happens around 2am? Just asking for my landlord 😂😂😂😂😂😂😂😂😂”

Watch the video below;