The Dj took to social media to reveal that both her and her elder sister are single. 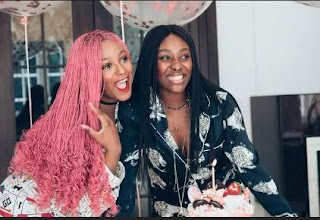 Nigerian entertainer and billionaire daughter, DJ Cuppy has revealed that her sister, Tolani Otedola is single – just like herself.

The trio of Tolani, Ifeoluwa and Temi all recently got a Ferrari luxurious car gift from their dad Femi Otedola.

The excited girls took to social media to share photos of their father’s gifts to them as they celebrated.

Dj Cuppy took to her Twitter page to post the photo of the sisters posing with their cars with their customized plate numbers.

Earlier before today, she had taken to her Twitter page to announce she was going to break the internet and fulfilling her promise, the photos of the sisters in their new whips are already breaking the internet.

In reaction to the post, a social media user asked about who is dating Tolani Otedola and Cuppy, and the DJ replied by revealing that the pair are single.